‘Pataphysics is a fictional science: the science of imaginary solutions. Sharon Harris proposes a problem for poetry to solve: how to unfold a book if the book is a lotus; how to unfold a word at the centre of that book? AVATAR is a word that is commonly heard but rarely understood. AVATAR (in virtual reality) is an icon representing a person online. AVATAR is the bodily manifestation of a God in Hinduism. AVATAR is a little like dancing with a cartoon after it shimmies off screen.

2005 Shift & Switch: New Canadian Poetry. Eds. derek beaulieu, Jason Christie, a. rawlings. Toronto: The Mercury Press. Globe and Mail review, “Let’s Get ‘Pataphysical” by Christian Bök. “This poet is having fun with language and you know what, so is this reader.” – Reading Children’s Books, 2011. 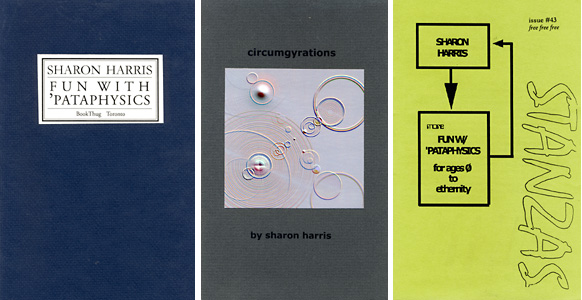 “A collaged assemblage of shiny fragments, at the intersection of whimsy and technology, AVATAR will charm and disarm you.” -Maggie Helwig

“I love the fact that this is a book that collects ways of creating ‘I love you.’ Screw Oprah and Dr. Phil and the eerie weirdos who have perpetrated The Secret on us.” – Sina Queyras