Sharon Harris has love on the brain, and it has somehow ended up on the page. As opposed to the ‘can’t we all just get along’ theory of Love, Harris has compiled a unique book of poems, analytical thought and visual art as a way of exploring the word we use to express ourselves with the purest of intent (provided its not from a strange guy at a bar at 2am). Avatar is Sharon Harris’s first published book of poetry which seems to be permeating her Toronto community, and spreading to a much larger circumference, with theories on Love.

The title of Harris’ book of poems, Avatar, has a double meaning: the more ancient concept from Hinduism which means ‘the bodily manifestation of a God’, and the present day technological expression of Avatar, which is the ‘icon representing a person online.’ A convergence of ancient spirituality and modern day technology, Harris combines abstract with exact, and free thought with analysis.

This may be the start of Harris’s adventures in the theory of Love as she explains her inexhaustible fascination with the subject, and her future projects on the go. Harris also discusses some of her own thoughts on the poems and art she has compiled in Avatar, and the theories they examine. Don’t be confused though, Harris is not a pure analyst, as she expresses her thoughts on Love in both a reflective and disarming manner.

Where did your fascination with the term ‘I Love You’ come from?

On the first spring day of 2001, I was walking west on Harbord Street in Toronto when I saw those three words painted on some brick. The graffiti simply stated “I Love You” in indigo paint—without the usual street art techniques or embellishments. This clear message in the strong spring light was almost too much; I was going through a divorce, and though I love winter, it wears me down during its last, relentless days. I made a mental note to return with a camera.

By the time I reached the end of Harbord Street (at Ossington), I was greeted by twelve more indigo ILY’s. A heady, serendipitous moment transformed into a full-blown life-changing experience.

I didn’t know I’d be chasing and photographing over a hundred more indigo ILY’s over the next five years (and later, a few green ones). I didn’t yet know how this process of documentation would help define the creation of my own art about love.

Everyone has different ideas about how we love. Often these concepts contradict each other, but throughout these countless opposing views, there exists one common denominator: the presence of the declarative statement, “I Love You.”

This loving message presented in an unconventional way —illegally, as Graffiti — inspired me to literally look at my own art practice in a new light.

Is ‘I Love You’ an overused or perhaps inappropriately used term in society today? If ‘I Love You’ is an overused term with little meaning attached to it now, what can we as a society, do to change how we respond to the term?

I think that “I Love You” can’t be said too often. A 2005 study speculated that it became more frequently spoken at the turn of the twentieth century. It gained popularity due to movements that encourage the expression of emotion: feminism, the anti-war demonstrations of the 1960’s, and the men’s liberation movement of the early 1970’s. With the spread of North American values through cultural imports (especially through technology), “I Love You” is more commonly heard at home and abroad. 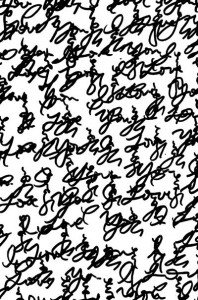 On your website, www.iloveyougalleries.com, it seems that your artwork has a very altruistic aspect to it. Do you feel that is the way to get your artwork and ideas to a greater audience? Does the internet also facilitate this goal?

I intentionally set out to make art and write about altruistic love. It’s a topic not often discussed outside of religious contexts; for better AND for worse, we’re quickly losing our religions. For example: I would love to take my kids to a church where their souls would be nurtured and they would learn to nurture the souls of others, but the doctrine gets in the way.

My ideal religion would teach its flock to “Be Excellent to Each Other” (Bill and Ted’s Excellent Adventure), and to celebrate the universe. But that’s how I try to live life anyway. When I was photographing the ILY’s in an alley one glorious Sunday morning, a man asked why I was not in church. “I am,” I said.

I don’t think about an audience when I’m making art, but the Internet has helped get my work out into the world, and has connected me to other like-minded artists. 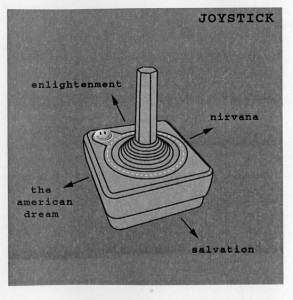 How is expression through art and writing different? Similar?

I’m a writer first, but likely as visual as writers come. My visual art contains language, so I still call it writing. I’m influenced by avant-garde forms of art and literature: pattern poetry throughout history, cubism, surrealism, concrete poetry, and street art. It makes sense to me to write about love using experimental forms. I’m in debt to Robert Indiana, creator of the famous “LOVE” paintings and sculptures. He wrote poetry too—including an excellent poem about the word, “LOVE”—and incorporates lines from Whitman, Melville, and Crane in his paintings. I’m also indebted to bpNichol, whose spirit is thanked in AVATAR.

Besides AVATAR, what is your favourite book?

I’ll never be able to pick a favourite book, but Crystallography by Christian Bök is the book of poetry I praise highest for its influence. It arrived in my life when I most needed it, and introduced me to a long list of its own influences. It was like a welcome creature from an exotic planet.

‘Avatar’ in the realm of technology means ‘an icon representing a person online,’ and in Hinduism it means ‘the bodily manifestation of God’; within your book of poetry, and your art, you examine concepts from science/technology and religion, sometimes even exploring their facets together. Do you see great similarities or differences within these two often separated themes?

After a really great math class in grade twelve, I was walking down the hall in a blissful state. Then I realized that the material was exactly the same lesson presented in an art class a week before. I realized that every subject is the same—they’re just taught from different angles, with their own specializations. I was angry because no one had ever told me that every branch of learning represents one method of approaching the big questions: “Why are we here?” “What is the meaning of life?”

How does the everyday person apply ’pataphysics (the fictional science of imaginary solutions) to everyday life? Is this science of whimsy a way of standing back and not taking ourselves too seriously?

It would be highly dangerous to apply ’pataphysics to everyday life ; ) I’d advise some tightly controlled experiments first.

From “Fun With ’Pataphysics”:

99a. Where do poems come from?

Moisten your finger and hold it straight up in the air. You will notice at once that one side of the finger is cold. This is the direction from which the poem is coming.

Place a folded poem around a knife blade. You can cut a reader with it without damaging the poem.

The poem is forced into the reader with the knife. It is not cut itself because the pressure of the blade on the poem is countered by the resistance from the reader. Since the reader’s flesh is softer than the poem fibre, it yields. If, however, you hold the poem too firmly, the pressure balance is lost, and the poem is broken.

The “Fun With ’Pataphysics” poems were inspired by the condescending tones found in non-fiction children’s books. After reading a few of these how-to books with my kids, it was apparent to me that I’d heard that precious sort of voice before … their authors began to sound like people who get righteous discussing poetics.

What is your next artistic project? What can you tell us about it?

I’ve been working on an illustrated book, I Love You: Three Little Words, for the past five years. Excerpts from it appear at The I Love You Blog. It’s a study of ILY in popular culture; enough material exists for three books on the subject, so I need to start editing. I’m also working on a children’s activity book about love, and two poetry manuscripts. I contribute to Torontoist.com and Word: Canada’s Magazine for Readers + Writers.

What was the best piece of advice you were ever given? A philosophy you live your life by?

From bill bissett, when asked to give advice to a young writer: