Overspray Magazine – I Love You, Too

I Love You, Too: One Passerby’s Response to Global “I Love You” Graf 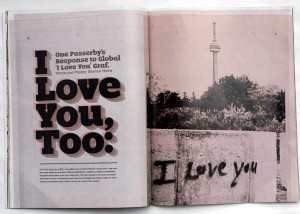 On the first spring day of 2001, I was walking west on Harbord Street in Toronto when I saw three little words written on some brick. Without embellishment, qualifiers, or stylistic considerations, the graffiti simply stated I Love You in indigo paint. This clear message in the strong spring light was almost too much; I was going through a divorce, and though I love winter, it wears me down during its last, relentless days. I made a mental note to return with a camera.

By the time I reached the end of the street, twelve more mysterious blue ILYs greeted me in their quiet understatement-of-an-overstatement sort of manner. A heady, serendipitous moment transformed into a full-blown life-changing experience. I didn’t know I would be chasing and photographing one hundred and fifty more indigo ILYs during the next five years throughout the city.

In 2005, my search went online, where photographs showed writers from New York, Paris, Berlin, Montreal, London, and Winnipeg also declaring their love in series, sometimes painting I Love You hundreds of times. My mission was to find these writers. Thanks to the quick email work of the Wosster Collective, a message arrived in my inbox from Nathan Reimer, the New York City ILY artist. After I appeared on national radio in Canada to talk about the graffiti, the writer from Winnipeg, Ryan Klatt, emailed. One year later, I received a note about I Love You graf in Berlin from one of the artist’s fans, and found artists painting, “Je t’aime” in Montreal. But after many leads to the identity of the Toronto artist, a trusted source revealed that he wishes to remain anonymous.

The question I wanted to ask each writer is, why? And why I Love You? Ryan Klatt responded,

“I realized the importance of the words while overlooking the ocean from a high cliff in St. John’s, Newfoundland. It was the concept that drew me in, knowing that people need to feel loved and be told that they are loved. I had been searching for years for the right thing to say in the public art context, while writing things that weren’t totally satisfying. I just knew that the streets were a great place for art and concepts.

I think that people are searching for purpose in their lives, and in loads of cases, that purpose is to be loved. I feel the work I do with the words lets the viewers know someone out there is loving them. Maybe they create the love within themselves, by thinking of someone loving them when they read the text. I hope that these positive, optimistic words thrown out on the streets can play even a small role in creating a positive shift in our group consciousness. Also, I think that positive graffiti subverts the general public’s stereotypes that graffiti is bad, and a societal problem.”

In English, we don’t have a proper synonym for the word, “love.” Thus, I Love You is one heavy statement which encompasses many feelings. Language translators have remarked that English is a fine language for business transactions, but not so great for expressing emotion. Part of the ILY beauty is that passersby, when faced with it, can deal with the statement in a non-committal sort of way. You love me? Can I accept that, even if I don’t know you? Can I feel it? Is this message for me, for all of us, or someone else? We can gaze upon I Love You without conforming to society’s pressures.

The work is accessible to many different people, across class, gender, ethnic background — categories that don’t seem real to me anyway. Right now, love is political. Making art in the street is also political. Mix the two, and you have a powerful catalyst for social change. Look at any example of the graffiti, and feel it hear our collective fear. The graf is helping us wake up to the fact that all we really have is each other.

These writers are young men in their twenties (except fifty-nine-year-old Parisian artist, Jean-Luc Duez), during a time when beer commercials and men’s magazines would have us believe that they are at the height of their machismo. The patriarchal hierarchy should be deeply troubled by this fact. A highly valued demographic which carries substantial cultural capital is telling us that they love us, suing methods that are anti-corporate and against the law to get their message out.

But politics are often ignored when the graffiti says I Love you. Mainstream stories about the graf focused on the message, not the controversial medium. Articles about Toronto’s graf appeared in some of the strangest, right-wing, conservative media without any questioning. In 2006, the NYC graffiti even became part of the Canadian literary canon. Playwright Daniel MacIvor’s I Still Love You was awarded the Governor General’s Award, the highest literary prize in Canada. On the cover was a photograph of Nathan’s handiwork. What does this tell us about our culture?

Jimi Hendrix once said that when the power of love overcomes the love of power, the world will know peace. 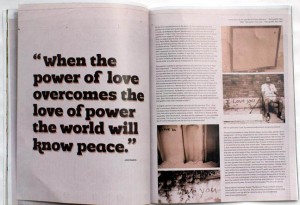