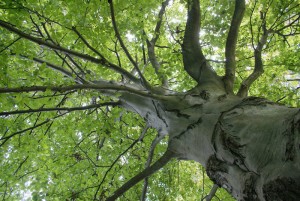 Also, 8.4% of our canopy is ash, which is being wiped out by the Emerald Ash Borer. Pretty much all of our ash trees are expected to die by 2017.  A U.S. study showed that with the loss of canopy there, human health suffered: there was a significant increase in cardiovascular and lower-respiratory-tract illnesses.

In just a few days, we lost approximately 20% of our 20% forest cover, . (my mistake: urban tree canopy (UTC) is the layer of leaves, branches, and stems of trees that cover the ground when viewed from above — not the number of trees).

With amalgamation, Urban Forestry was deeply cut. In 1990, prior to amalgamation, the old City of Toronto spent $128,000 per square kilometre per year maintaining the urban forest. By 2007, the city spent less than one quarter of that amount. Then, there were more budget cuts in 2012, all the while having a plan in place to increase the canopy.

“Total funding for the Hazard Tree Abatement Program will be reduced by $0.800 million from $1.400 million to $0.600 million in 2012. $.8M reduction in 2012 meant the Tree Abatement Program became a ‘reactive response to hazardous trees in parks and natural areas.’ The 2012 Operating Budget for Parks, Forestry and Recreation included $0.174M reduction by eliminating 3 permanent positions.”

Meanwhile, in 2007, Toronto City Council adopted a plan to significantly expand the City’s forest cover to between 30-40%.

a. Toronto’s urban forest provides the equivalent of at least $60 million in ecological services each year. The benefits derived from the urban forest significantly exceed the annual cost of management.

b. Toronto’s trees store 1.1 million metric tonnes of carbon annually or the equivalent of annual carbon emissions from 733,000 automobiles.

f. Urban tree canopy helps to mitigate storm water runoff. Simulations that doubled the tree canopy in the Don watershed indicate a 2.5% decrease in overall flow. Simulating removal of impervious cover in the watershed reduces total flow by an average of 23.8%.

a. Help to settle out, trap and hold particulate pollutants (dust, ash, pollen and smoke) that damage human lungs.

b. Absorb CO2 and other dangerous gases and, in turn, replenish the atmosphere with oxygen.

c. Absorb enough CO2, on each acre, over a year’s time, to equal the amount you produce when you drive your car 26,000 miles.

e. Studies suggest that loss of trees increased mortality related to cardiovascular and lower-respiratory-tract illness. This fınding adds to the growing evidence that the natural environment provides major public health benefıts: see The Relationship Between Trees and Human Health.

TREES SAVE ENERGY, SAVING YOU MONEY

Strategically placed trees can be as effective as other energy saving home improvements, such as insulation and the installation of weather-tight windows and doors. Trees can reduce air conditioning needs by 30 percent and can save 20 – 50 percent in energy used for heating.

Well-treed neighbourhoods = higher real estate value. A tree increases the property value of your home (up to 20 percent).

Trees absorb and block noise from the urban environment.

a. Add natural character to our city.

b. Provide us with colours, flowers, and beautiful shapes, forms and textures.

Trees create local ecosystems that provide habitat and food for birds and animals. They offer suitable mini-climates for other plants that would otherwise be absent from urban areas. Biodiversity is an important part of urban forestry.

I’m a poet who loves and writes about trees. Many people think I’m sentimental and romantic when I say trees are vital for our well-being, so I’m spouting science and statistics, saving love and poetry for last. But not least, etc.

“We have tons of parks, but unfortunately, that tree can’t employ anybody … As a businessman, I have the experience of creating jobs, meeting payrolls, and I understand how the real world works, the business world.” -Rob Ford

“Urban forestry has as much to do with sociology as it does with ecology. One of the largest threats to the trees in our city is the attitudes of humans and the actions these attitudes engender.” -Todd Irvine, arborist

I’m not a tree expert. Please add to this list, which was compiled in about an hour. There seems to be much misunderstanding about trees as infrastructure. It would be best if those who enjoy breathing get up to speed.

This list does not include suggestions for the future — that’s a whole other conversation. It is estimated that summers will be hotter and storms will be more extreme, so we have a lot of work to do.

Next post: Poems in Broadview Introduction to Literature: Poetry