Yes, hi there. This is the first blog post even though the website isn’t finished; kinda hoping it’s presentable before Google gets around to indexing it.

Stoked to read with poets Marilyn Irwin and Stephen Brockwell in Ottawa on December 7 at 5 p.m. rob mclennan will host the event, which is co-sponsored by the Ottawa International Writers Festival and The Plan 99 Series at The Manx Pub. There’s a nice write-up about the launch in Ottawa Tonight.

Thanks to Mitchell Kaplan for having me on his radio show, Click Here, last night. A recording will be online at CHUO for one month.

The anthology arrived from the printer today! It’s available at Chaudiere Books. Co-publisher Christine McNair writes, “I finished all the typesetting whilst 40weeks pregnant and confirmed the cover stock with the printer during labour. (Really.)” 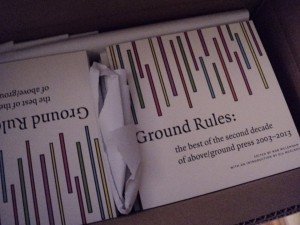 Next post: A Toronto Tree Primer, after Ice Storm 2013