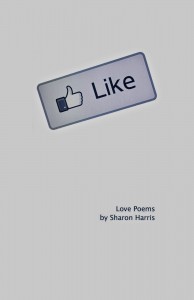 It’s difficult to write about your own work, but I think it’s safe to say I seem to be an experimental love poet who is interested in our most basic language of affection. I studied the countless ways we express love’s quintessential statement, “I love you,” (in art, science, religion, history, popular culture, and more) for seven years. The main theme of my first book, Avatar, was connection through various online technologies (2006: pre-Facebook and Twitter).

When I was a kid, the art form that most represented pure emotion to me was pop music. Couples chose “our song,” teenagers curated mixed tapes for friends and crushes, and songs were dedicated on radio programs. The right song seemed to know how I felt — or were my feelings influenced by the song? Sure, I might fancy someone, but did I need to feel that every breath he took and move he made needed to be watched, or that I couldn’t live with or without him? My young self felt every note of these songs, anyway.

Maybe the default emotions of social media limit the wide range of possible feelings, as a radio mix of a pop song flattens its frequencies into a small band optimized for broadcast. Maybe it’s easier to feel that which is suggested and deemed acceptable. Or it’s easier not to feel.

It ain’t easy being a love poet when the dominant emotion is Like. If you find these poems flat, and if you feel a little bit disgusted after reading them, I feel all the things.

Another manuscript in progress, Chemical Valley Girl, addresses Valspeak — another language of repressed emotions. Maybe my work is about the understanding of repressed emotions, rather than the expression of emotions, and the unwritten rules made by unseen powers who benefit from an emotionally lazy populace.