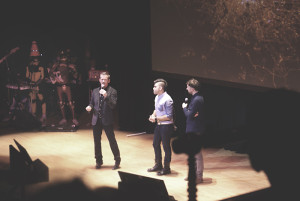 After a great math class in eleventh grade, I wandered through the halls of Northern Collegiate, awestruck. I realized I was learning the same lesson in my music and art classes.

“It’s all the same!” I thought. “There is only one subject.” But I was never the same after that day.

As a poet, I’ve presented a series of faux-scientific lectures which are ridiculously fun for me because I get to pretend to be a scientist and wear a lab coat. So I was excited to attend Chris Hadfield’s Generator, a variety show featuring scientists and science-based artists. They seemed like my kind of people.

The show opened with an “elite squad of rock stars from the future” named Tupperware Party Remix and their friends, Ninja Sex Party. Appearing as spandex superheroes in KISS armour and miscellaneous Halloween costume bits, they led us in a cover of “Everybody Wants to Rule the World.” In other words: futuristic funkadelic 80s sing-a-long perfection.

After we recovered, MC Robin Ince introduced himself as a “Renaissance idiot,” explaining that he had “read enough about a lot of things to be wrong about everything.” He was partly joking, partly serious, but extremely modest, as he is the host of BBC science series The Infinite Monkey Cage and has taken part in many science variety shows. In fact, Generator was modeled on his own work. His infectious enthusiasm (and “irreverence”) for science put those of us who are non-scientists at ease.

When Robin Ince introduced the man of the evening, Chris Hadfield, the crowd, so skillfully warmed, cheered loudly. Before the show began, I overhead conversations that indicated many audience members travelled far to see Generator. One student took the train from New York City and returned the same night.

Chris Hadfield shared his boyhood astronaut dreams, taking us through the non-linear career path of hard work it took to fulfill them. His voice quickened, rose, and broke at the pinnacle point in the narrative: the story of his first space walk.

Larger than life on-screen, we watched him traverse head-first through the airlock, like a birth, and then he froze – half inside the ship, half outside in space. Next, in a Road to Damascus sort of moment, he was blinded. The loss of sight was temporary (due to de-fogger in his eyes), and when it returned, he said he experienced a “raw, completely optimistic view of the world.”* I got the feeling that the reason all of us were here was to hear this message.

There are many possible paths which lead to the same revelation. But Chris Hadfield’s story is literal: he looked at Earth with his own eyes, and observed.

Throughout the evening, guest performers revealed they were asked to “tell a personal story,” a “story about what motivates me,” or to “share an anecdote as a metaphor that explains what you do.” Generator was billed as a science-based variety show, but it was also designed to inspire. To remind us of the power of human imagination, which seems to “get lost in the bad news of the day.”

Not surprisingly, the audience swooned when the band and Chris Hadfield performed David Bowie’s “Space Oddity” – a song rich in history and lore, the latest being that it has been to space and back. His re-write of the lyrics changes the song’s story: instead of ending in disaster, it ends on an optimistic note. No longer a work of fiction, it becomes an intense personal story. Again, the experience moves from metaphorical to literal.

“Inspiration” and “motivation” are important words that can be diminished by empty New Age quotes, the kind that well-meaning friends pair with photos of beaches or puppies and share on the internet. These words seemed to re-gain power as the presenters told their stories of science-based dreams and accomplishments.

Data artist Jer Thorp makes large amounts of information understandable and accessible with beautiful visual representations, giving it meaning and narrative. “Data holds story,” he said. He shared an anecdote about a project in Africa for which he collected data as evidence that an ecosystem there was worth saving. Some of my visual poet friends might enjoy checking out his work (his TED Talk was heavily shared in that community).

Planetary scientist Marianne Mader explained the motivation behind SteamLabs, “a non-profit makerspace dedicated to empowering kids and adults to create and innovate.” Throughout childhood, she watched her brother, a tech-oriented learner, struggle through school. The experience inspired her to create a space where kids with similar talents could thrive. She shared a heartfelt letter of thanks by a mother whose son’s life was changed by his experience at StreamLabs.

Engineer and host of YouTube’s popular Smarter Every Day, Destin Sandlin, demonstrated his Backwards Brain Bicycle experiment, showing that it takes perseverance and focus to truly change our behaviour. We can easily acquire knowledge, but it doesn’t equal understanding. It was also a reminder to be aware that our views —on absolutely everything we encounter—are always biased, whether we’re aware of it or not.

Comedian Mark Little parodied a TED Talk and reminded us not to take ourselves and our sincerity too seriously (as comedians should). He also played an amusing role in an onstage interview between Chris Hadfield and NASA systems engineer (“Mohawk Guy”) Bobak Ferdowsi. Ferdowsi told his story of becoming a media sensation after his mohawk was seen on NASA’s live broadcast of Curiosity’s landing on Mars. Sketch comedy troupe Templeton Philharmonic made us laugh, too.

One important role played by poet Marshall Jones: he strongly reminded us to question everything (as poets should), and that technology is a double-edged sword. From his poem, “Touchscreen”:

Mitch Bragan, who was paralyzed after being hit by a drunk driver, demonstrated his self-balancing exoskeleton suit that supports him so he is able to walk upright. The robotic suit “allows paraplegics and other wheelchair bound individuals the ability to rehabilitate and to walk.” If that’s not inspiring, I don’t know what is.

If you’re lucky enough to have a moment in which you experience a “raw, completely optimistic view of the world,” you can’t un-see it, you can’t un-do it. It changes you, and it alters the path of your life. For most people, it’s a metaphorical moment – an event occurs which causes us to draw similar conclusions.

Chris Hadfield’s gift to us is that, as an astronaut, he literally viewed Earth as a whole, leaving nothing to the imagination. When we hear such a clear first person account, we can’t un-hear it. We’re changed, too.

Raw optimism based on pure observation is sometimes difficult to come by on this planet, but on this night, 2600 people at Massey Hall believed. For a few hours, our attention was directed towards inspirational stories told by thoughtful people who are doing their part to co-create a much bigger and brighter future together. Generator, indeed.

*I would like to factcheck this sequence of events as I understood it. The details were confirmed in another talk, but the order was not. If I’ve made a mistake, I apologize.

Best wishes to the young woman with astro-biologist aspirations who sat beside me. It was great to meet you.

Truly magical moment: when one of the Ninja Sex Partiers took the mic, made a plea for beauty, and gave an epic rant on Higgs Boson calculations and the pros of supersymmetry. Turns out he is theoretical physicist Brian Wecht.

Prediction: if you want to see the next Generator, you’ll probably need to buy tickets early. It will sell out due to favourable word-of-mouth reviews.