Such a summer it is.

I read poems and took part in a panel with Andy Weaver and Stephen Cain at the Canadian Writers Summit next to Lake Ontario, at Harbourfront. After the reading, my shoes melted.

As part of above/ground press’s 23rd anniversary, I read more poems, setting a few on fire (literally, not figuratively), and managed to not burn anyone.  Will add more pyrotechnics to the Fun With ‘Pataphysics show because it is hella fun to perform.

In love graffiti news, I photographed a lot of it, as there is more now than ever (can’t be a bad thing, right?). I’m excited by two new series, “Crushed Toronto” (featuring the word, “crush” hundreds of times), and “All the Feels” (featuring “feels”). Planning new shows.

I spent most nights this summer on baseball fields. Late in the season, I started photographing different elements of their landscapes, often with sunsets or sunrises. I fell in love with chain link, field lights, and lines of chalk. The project is tentatively titled Fields of Dreams. 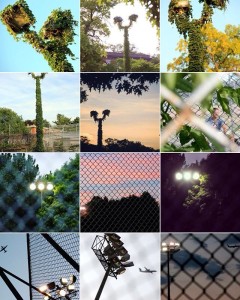 Two more days until fall. Will try to squeeze a few more things in.

Next post: Spacing Names Me One of “12 Extraordinary Toronto Women”